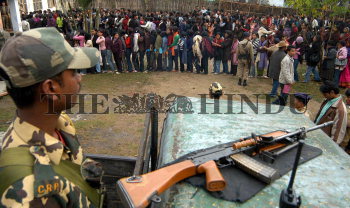 Caption : NAGALAND„05-03-2008 :(NAGALAND ASSEMBLY ELECTION POLLING) Security personnel keeping vigil as the large number of voters turn up to cast their votes at Forest Clooney polling booth in Dimapur 1 constituency in Dimapur, Nagaland on Wednesday, March 05, 2008. About 1.3 million voters are likely to decide the fate of 218 candidates, including four women, contesting for the 60 assembly seats in Nagaland. PHOTO: RITU_RAJ_KONWAR