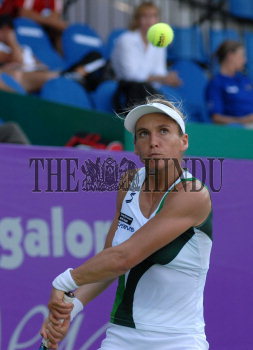 Caption : BANGALORE, 03/03/2008: Sybille Bammer of Australia, who beat Akiko Morigami (not in pic) of Japan, in action during the Bangalore Open WTA tennis tournament at the KSLTA Courts in Bangalore on March 03, 2008. Photo: K. Gopinathan