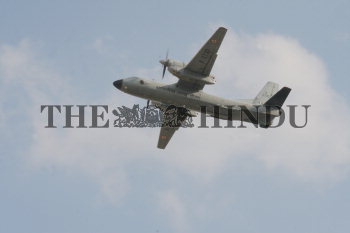 Caption : COIMBATORE, 02/03/2008: AN-32 Transport aircraft at the Sulur Air base during an air show held as part of the Platinum Jubilee of the Air Force in Coimbatore on March 02, 2008. Photo: K. Ananthan