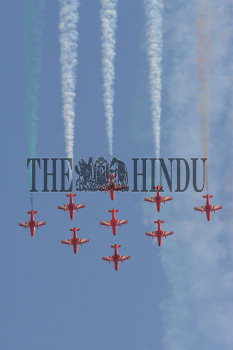 Caption : COIMBATORE, 02/03/2008: Surya Kiran aircraft of the Indian Air Force carrying out an aerobatic dispaly at an air show held as part of the Platinum Jubilee of the Air Force at the Sulur Air base in Coimbatore on February 02, 2008. Photo: K. Ananthan