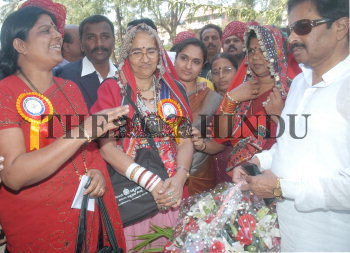 Caption : BANGALORE:02/03/2008: Former Chief Minister S. Bangarappa being recived by former minister and President of the Association B.T. Lalitha Nayak at the inauguration of Seminar on Nomadic tribes Kala Mela which was oragnised by Karnataka Pradesh Banjara Lambani Seva Sangha in Bangalore on Sunday. Photo: V_Sreenivasa_Murthy.