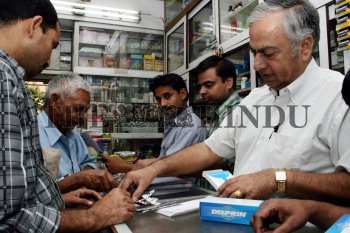 Caption : NEW DELHI: A scene at Khan Market in New Delhi on October 31, 2006. Chemist shops in the city called off their support on the second day of the strike called by the Delhi Traders Association against the MCD sealing of shops in New Delhi. Photo: Shiv Kumar Pushpakar