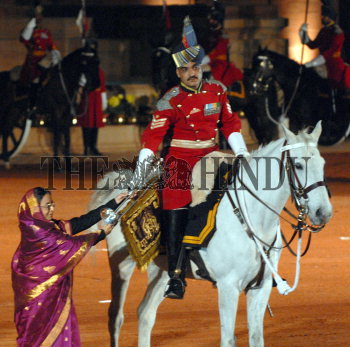 Caption : NEW DELHI, 01/03/2008: President Pratibha Patil presenting the Silver Trumpet Banner to President's Body Guard at a ceremony held at Rashtrapati Bhavan in New Delhi on March 01, 2008. The PBG is the only military unit in the Indian army that is privileged to carry the President's Silver Trumpet and Trumpet Banner. The regiment was raised during the British colonial rule at Varanasi by the then Governor-General, Warren Hastings, in 1773 and was titled as the Governor General's Bodyguard. Photo: R.V. Moorthy