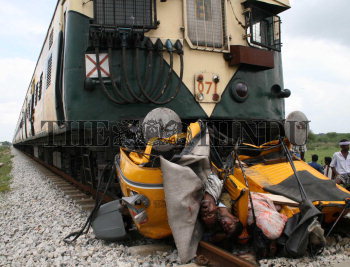 Caption : KANCHEEPURAM: The mangled remains of the ill-fated autorickshaw, which was hit and dragged along the track by an EMU near Pudupakkam village in Kancheepuram - Arakonam section on October 31, 2006. Photo: A. Muralitharan