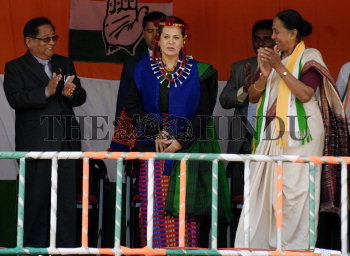 Caption : NAGALAND„01-03-2008 (SONIAŌS ELECTION RALLY IN NAGALAND) Congress President Sonia Gandhi dressed with a traditional Ao Naga tribal dress flanked by CNP Leader I Imkong and Congress northeast in charge Margret Alva during an election rally in Dimapur, Nagaland on Saturday, March 01, 2008. Sonia Gandhi addressed two election rallies in Dimapur and Mokokchung district of Nagaland for the forth coming Assembly election which is scheduled to be held on March 5th. PHOTO: RITU_RAJ_KONWAR