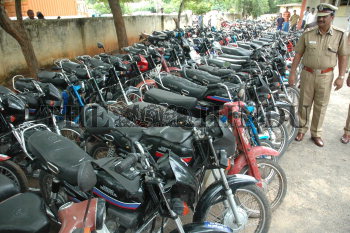 Caption : M. Chidambarasamy, Commissioner of Police, Madurai, with the 55 stolen two-wheelers, which were recovered, and being kept at the Tallakulam police station in Madurai on October 31, 2006. Photo: G. Moorthy