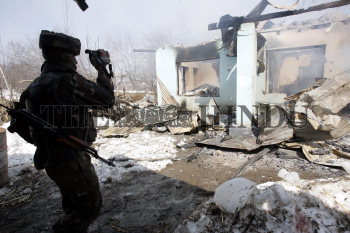 Caption : SRINAGAR, 29/02/2008: Army jawan beside a house damaged during a gun battle between militants and security forces at Sadipora, Shopian district, on February 29, 2008. Four militants were killed in the gunbattle that began when the Rashtriya Rifles troops and police launched combing operations in the area to flush out militants, official sources said. Photo: Nissar Ahmad