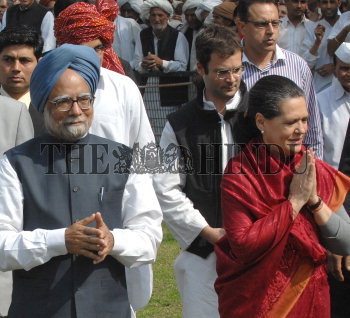 Caption : NEW DELHI, 29/02/2008: Prime Minister Manmohan Singh along with UPA Chairperson and Congress president Sonia Gandhi and Rahul Gandhi, MP being greeted by the farmers from Delhi and Haryana, when they meet them to thank the UPA Government for waiving their loans, in New Delhi, on February 29, 2008. Photo: Shanker Chakravarty