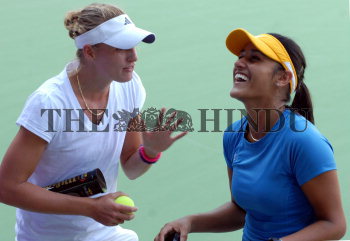 TENNIS PLAYER SUNITA RAO OF INDIA DURING THE PRACT

Caption : BANGALORE, 29/02/2008: Tennis player Sunita Rao (right) of India sharing a lighter moment with Monique Adamczak of Australia during a practice session at the KSLTA Stadium in Bangalore on February 29, 2008 ahead of the Bangalore Open tennis championship. Photo: K. Gopinathan