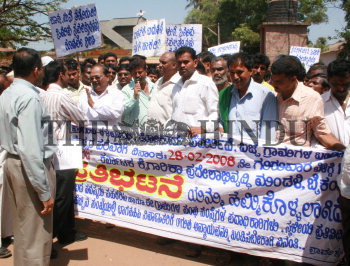 Caption : MANGALORE, KARNATAKA, 28/02/2008: Residents of Bala, Permude, Bajpe and Thokur villages staging a protest in front of Karnataka Industrial Area Development Board's (KIADB) office in Mangalore on February 28, 2008. The agitators who were the owners of about 1,800 acres of land which has been acquired for the Mangalore Special Economic Zone (MSEZ) project, complained that their names had been omitted from the list prepared for rehabilitation and resettlement packages. Photo: R. Eswarraj