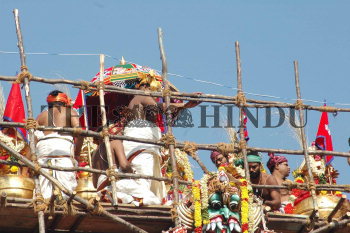 Caption : CHENNAI, 28/02/2008: Priests performing Kumbabishekam of Sri Kapaleeswarar Temple at Mylapore on February 28, 2008. Though a Kumbhabhishekam was performed in 2004, it was done again now as the temple's Rajagopuram (eastern side) was struck by lightning in August last year. Photo: R. Ravindran