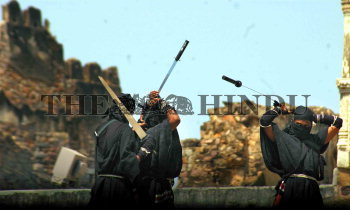 Caption : HYDERABAD, 28/02/2008: The rugged ramparts of the Golconda Fort are quite popular with movie-makers. A film crew was busy shooting a secene of a yet untitled Telugu film on February 28, 2008. Visitors to the 16th century fort in Hyderabad had a gala time watching the black attired soldiers welding swords in action. Photo: Mohammed Yousuf