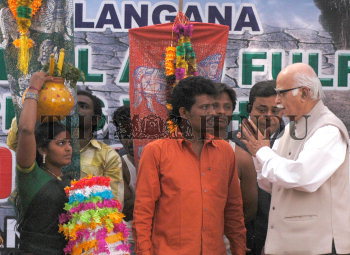 Caption : NEW DELHI, 28/02/2008: Leader of Opposition and BJP leader Lal Krishna Advani interacting with the folk artists, during a rally in support of formation of Telangana state separated from Andhra Pradesh which has a population of about 3.5 crores, in New Delhi on February 28, 2008. Photo: Rajeev Bhatt