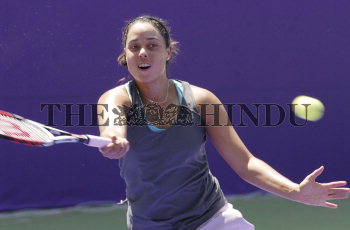 Caption : BANGALORE, 28/02/2008: Tennis player Alexandra Stevenson of United States in action during a practice session at the KSLTA Stadium in Bangalore on February 28, 2008 ahead of the Bangalore Open tennis championship. Photo: K. Bhagya Prakash