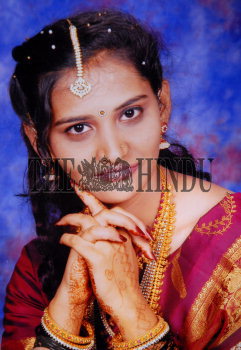 Caption : BANGALORE, 28/02/2008: 23-year-old Roopa who committed suicide by hanging from the ceiling of her room, allegedly for dowry harassment, in Bangalore on February 28, 2008. She also left a suicide note holding her mother-in-law responsible for her death. Photo: K. Gopinathan