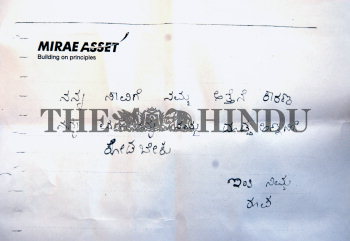 Caption : BANGALORE, 28/02/2008: A view of the suicide note left behind by Roopa who committed suicide by hanging from the ceiling of her room, allegedly for dowry harassment, in Bangalore on February 28, 2008. In the suicide note, she held her mother-in-law responsible for her death. Photo: K. Gopinathan