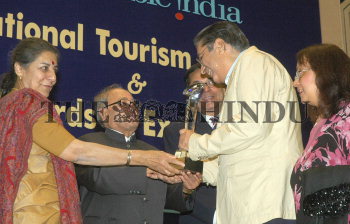 Caption : NEW DELHI, 27/02/2008: Pranab Mukherjee, Minister for External Affairs and Ambika Soni, Minister for Tourism, presenting the "Excellence in Publishing-English" Awards to Vinod Mehta and Manju Rastogi of Outlook Traveller magazine, during the presentation of National Tourism Awards and Awards for Excellence 2006-07, in New Delhi, on February 27, 2008. Photo: Rajeev Bhatt