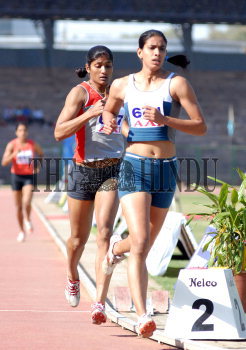 Caption : BHOPAL, 27/02/2008: Susmita Singha Roy (641) from West Bengal, who finished the 800 metres in the heptathlon to become the first Indian athlete this year to make the Olympics standard, in action at the 14th Federation Cup senior National athletic championship at T.T. Nagar Stadium in Bhopal on February 27, 2008. Soma Biswas of Bengal took the second position in the event. Photo: A.M. Faruqui