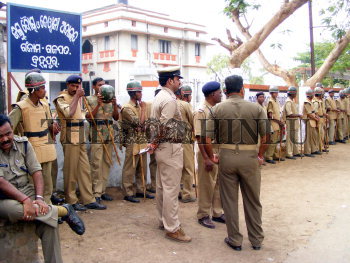 Caption : BERHAMPUR, 27/02/2008: The District Judge Court bears the look of a war zone as Section 144 was imposed inside the premises and heavy police deployment was made around it to prevent striking lawyers from keeping it under their control, in Berhampur on February 27, 2008. The court has been closed for the past 86 days due to continuing strike by the lawyers of the Ganjam bar association, who are demanding establishment of a High Court bench in the city for south Orissa. Photo: Lingaraj Panda