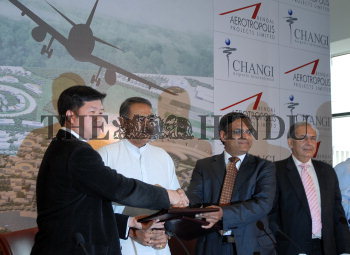 Caption : Kolkata: (From Left) Mr. Eugene Gan, Senior Vice President (Worlwide), Changi Airport International, Mr. Pruful Patel, Union Minister of Civil Aviation, Mr. Rajshekhar Agrawal, Director, and Mr. Arvind Pande, Chairman of Bengal Aerotropolis Projects Ltd. are at the signing of Technical Services Agreement (TSA) in Kolkata on Wednesday for the greenfield airport at Durgapur, West Bengal. The Durgapur project is the first Aerotropolis and private airport project in the country which would be built on a area of 300 hectares with a total land of 950 hectors. The airport is likely to be functional within three years time with a total investment of USD 2.5 billion or Rs.10,000 crores. The total project is expected to be completed in five years. Photo: Arunangsu Roy Chowdhury February 27, 2008.