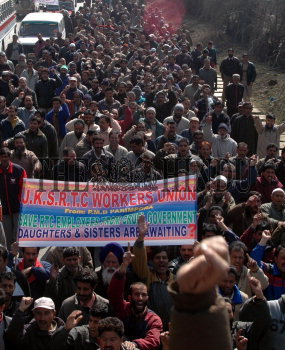 Caption : SRINAGAR, 27/02/2008: Employees of State Road Transport Corporation (SRTC) blocked the National Highway, the sole land route that connects the Valley to the outside world, in Srinagar on February 27, 2008. They are on a protest for the last 5 days demanding the release of their salaries that are withheld for the last six months. Photo: Nissar Ahmad