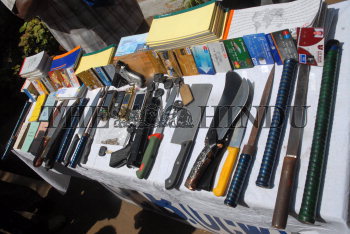 Caption : BANGALORE, 27/02/2008: Organised Crime Wing of CCB nabbed Ajith Kumar Singh who was allegedly involved in robbing and extortion of money and recovered a huge quantity of lethal weapons and other documents which was displayed at Police Commissioner's office in Bangalore on February 27, 2008. Photo: K. Gopinathan