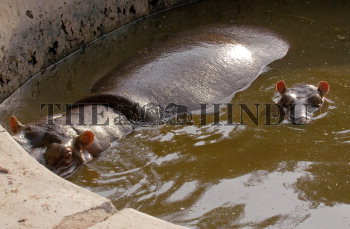 Caption : HYDERABAD, 26/02/2008: The hippo named Parvati at Nehru Zoological Park that gave birth to a male child six months ago is all happy as her son named Kumara Swamy is hale and healthy. However, the Zoo officials are disappointed as they wanted a female since they have only one female among the four incuding the new one. Photo: H. Satish 26-02-2008