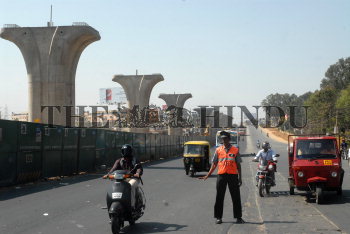 Caption : BANGALORE, 26/02/2008: Un imaginable!: A view of Hosur Road without traffic jam in Bangalore on February 26, 2008. Thanks to the on going unofficial transport strike called on by Federation of Karnataka Lorry Owners and Agents Association. Photo: K. Gopinathan Bangalore