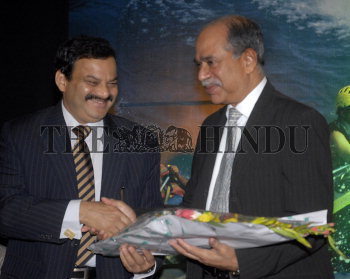 Caption : BANGALORE, 26/02/2008: P.K.H. Tarakan, Advisor to Governor of Karnataka being greeted by I.M. Vittal Murthy Secretary, Tourism, during the one-day workshop on 'Ecotourism in Karnataka: Challenges, Policy and the Future' at Hotel Grand Ashoka in Bangalore on February 26, 2008. Photo: K. Bhagya Prakash