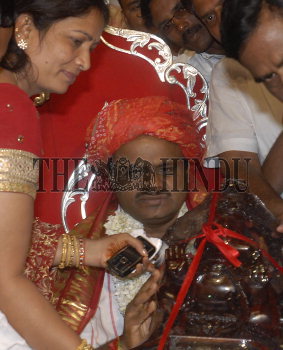 Caption : BANGALORE, 26/02/2008: Former Chief Minister H.D. Kumaraswamy being felecitated by Sheela Nayak, Secretary, State Organising Committee, during the State-level Banjara conference in Bangalore on February 26, 2008. He was felicitated for setting up a Banjara Development Corporation when he was Chief Minister. Photo: K. Bhagya Prakash