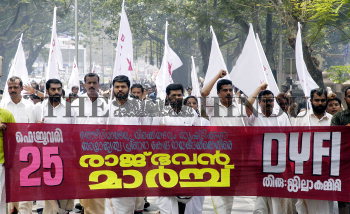 Caption : THIRUVANANTHAPURAM 25/02/2008-----The Raj Bhavan march taken out by the DYFI to protest against, what it described as, the Centre's policies which aggravated price rise and unemployment, on February 25, 2008...........Photo_C_Ratheesh kumar