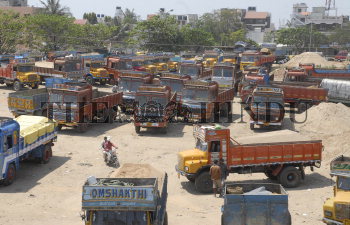 Caption : BANGALORE, 25/02/2008: Sand lorries that were off the road seen parked at Banashankari in Bangalore on February 25, 2008. The lorry operators have been opposing a High Court directive to the State, making installation of speed governors mandatory for all commercial vehicles by June 30. The Federation of Karnataka Lorry Owners and Agents Association President, G.R. Shanmukappa, and other officials of the Commercial Goods Transport Operators have been invited for talks by the Union Surface Transport Minister, T.R. Baalu. Photo: K. Bhagya Prakash