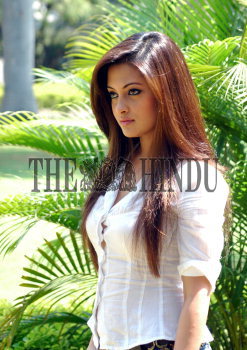 Caption : HYDERABAD, 24/02/2008: Well-known Bollywood actress Riya Sen getting ready to take a shot of her first Telugu film in Hyderabad on February 24, 2008 which is under production 'Nenu Meeku Telusa' film starring Manchu Manoj (second son of actor Mohan Babu) and actress Sneha Ullal. This film is due for the release in April. Photo: Mohammed Yousuf