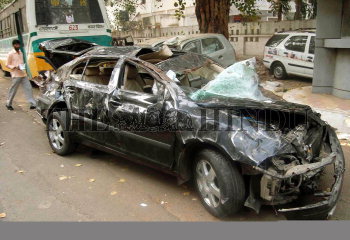 Caption : NEW DELHI, 24/02/2008: The damaged Car in which two college students were killed in an accident near India Gate. Two others were seriously injured and were taken to the RML Hospital. The accident took place when a Skoda car in which the victims were travelling rammed into a tree, The victims were returning from a party. in New Delhi, on February 24, 2008.