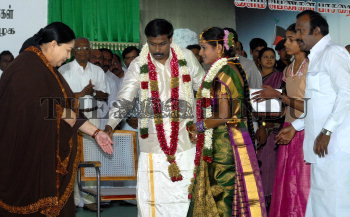 Caption : Chennai, 24-02-2008: The AIADMK General Secretary, Jayalalithaa conducts the marriage of the former AIADMK minister S.Muthusamy's son on the ocassion of her 60th birthday celebrations held on February 24, 2008. Sixty five couples were got married on the occasion. Photo:S_R_Raghunathan