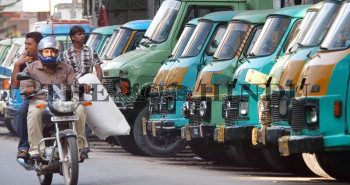 Caption : BANGALORE, KARNATAKA, 23/02/2008: A policeman passing in front of a luggage van parked due to strike in Bangalore on February 23, 2008. Over seven lakh commercial vehicles including trucks, taxis and maxicabs kept off the roads of Karnataka over the issue of mandatory speed governors. The strike was called by the Federation of Karnataka Lorry Owners and Agents Association. Photo: G.R.N. Somashekar