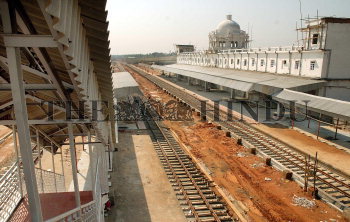 Caption : Agartala: The finishing touches being given to the Agartala Railway Station in Tripura on Thursday. For the first time, the state capital will be connected with the rest of the country by rail after 60 year of independence. Presently, the meter gaze track has been laid which will connect to Ambasa hill station. The train service is likely to start here by this year. Political parties have geared up the last minute campaing for the Tripura Assembly election. Para-millitary forces have been deployed all over the state for a peaceful election process in the 60 assembly constituencies. With 2036980 electors and 313 contestants from several political parties including 64 independent candidates the poll would take place on Feb 23, 2008 in 2391 polling stations in the state. Photo: Arunangsu Roy Chowdhury Feb 21, 2008.