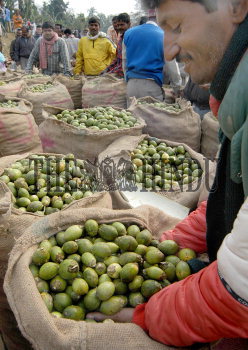 Caption : GUWAHATI„21-02-2008 :( BETEL NUTS FOR SALE) Betel Nuts being sold in a weekly market in Dudhnoi, 70km away from Guwahati city on Thursday, February 21, 2008. Betel Nuts are grown extensively in Assam, Meghalaya and Tripurs states. PHOTO: RITU_RAJ_KONWAR GUWAHATI„09-02-2008: (CABBAGES FOR SALE) Cabbages being put on display for sale in a local market in the out skirts of Guwahati on Friday, February 08, 2008. With the abundant production of the cabbages in the villages of Assam, the price has now come down to one rupee a cabbage, which is less than a rupee per kg. Villages in this whole sale market are selling their cabbages at a rate of Rs.50 per full cart. PHOTO: RITU_RAJ_KONWAR