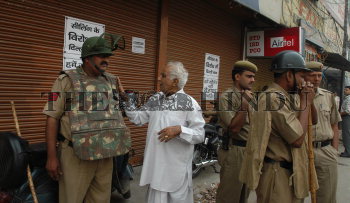 Caption : Police keep a vigil in front of the closed shops at Laxmi Nagar in New Delhi during the traders' bandh on October 30, 2006. All major markets in New Delhi remained closed on account of the three-day bandh called by traders in protest against the resumption of sealing drive on illegal commercial establishments. Photo: Ramesh Sharma