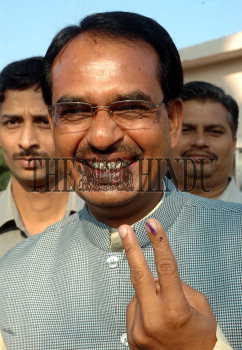 Caption : BHOPAL: Madhya Pradesh Chief Minister Shivraj Singh Chauhan displaying the mark on his finger after casting his vote at the by-poll elections at Sehore district in Bhopal on October 30, 2006. Photo: A.M. Faruqui