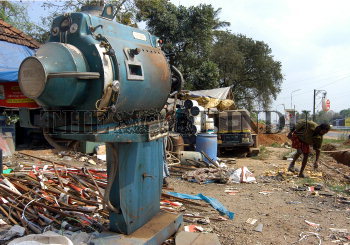 Caption : An old film projector gathers rust in a scrap collection center near Chalakudi in Thrissur district. This old product is priced at Rs 300 per kg . Cinema in small towns are fast disappearing from the state landscape, as more than 400 cinema theaters have been either shut down or converted as shopping malls during the last four years roughly from 1400 to 1067. Spreads of cable television, advent of plagiarized CD and huge decrease in number of good films have been cited as the major reasons for this phenomenon. Photo: K_K_Mustafah 18/02/08