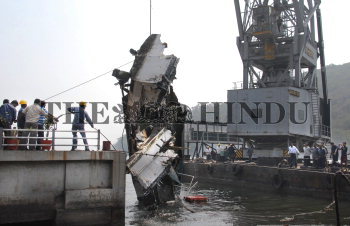 Caption : Visakhapatnam:15/02/2008: A pilot launch being lifted out of the port channel in Visakhapatnam on February 15, 2008, after it met with an accident. It was hit by a tug at the jetty in the early hours of Friday. Five in the launch escaped, but the driver is still missing and search is on for him. Photo: K.R. Deepak