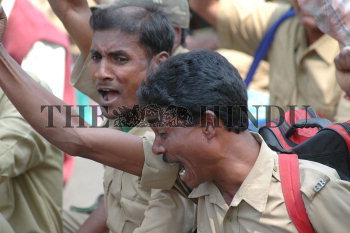 Caption : BHUBANESWAR, ORISSA: 15/02/2008: A large number of village guards shouting slogans during a demonstration before the State Assembly in Bhubaneswar, Orissa, demanding steps for their rehabilitation on February 15, 2008. Photo: Ashoke Chakrabarty