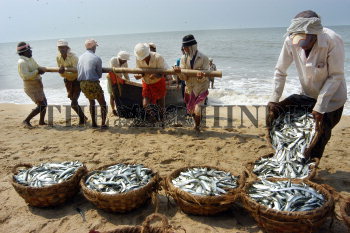 Caption : Fishermen coming back to the shore after a catch at Mogral beach near Uduma in Kasaragod, Kerala. The country‚s fish exports have dipped by 19.29 per cent to 3,92,939 tonnes during April ˆ December of current fiscal as against 4,86,895 tonnes in the corresponding period last year, due to poor harvest on the eastern and western coasts. In value terms, exports accounted for Rs 5,701.42 crore during the same period as against Rs 6,659.22 crore same time last year, according to reports by Marine Products Export Development Authority (MPEDA) Photo: K_K_Mustafah 15/02/08