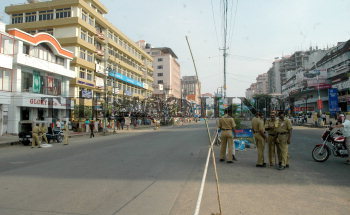 Caption : KOCHI, 14/02/2008: The usually busy Menaka junction wore a deserted look on February 14, 2008, after police blocked traffic along the region in connection with the arrival of Congress President Sonia Gandhi for the Sathabdi Sangamam organised by Kerala Pulaya Maha Sabha on February 14, 2008. Photo: Vipin Chandran