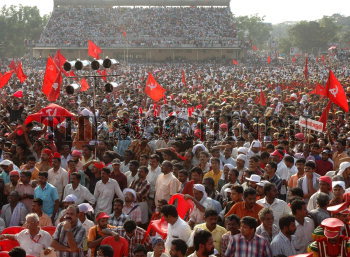 Caption : KOTTAYAM, 14/02/2008: SEA OF RED: The Nehru Stadium in Kottayam filled to the brim with red volunteers and CPI(M) supporters shortly before commencement of the public meeting to mark the party's 19th State conference on February 14, 2008. Photo: H. Vibhu