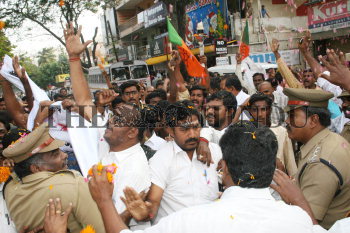 Caption : COIMBATORE, 14/02/2008: The BJP cadre who tried to break through the police security cordon on DB Road in Coimbatore City on February 14, 2008 evening for paying homage to the victims of the 1998 serial blasts being removed by the police. Photo: S. Siva Saravanan