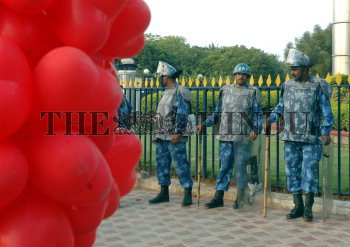 Caption : HYDERABAD, 14-02-2008: Jawans of Rapid Action Force were stationed at every hot spot in the twin cities including Lumbini Park on the ocassion of Valentines Day in Hyderabad on February 14, 2008. They were posted as there was a threat by the leftist parties who usually protest against celebration of Valentines Day. Photo: K. Ramesh Babu