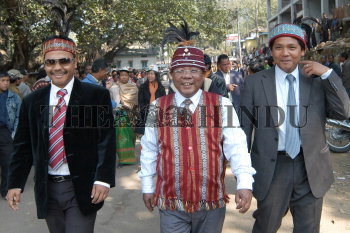 Caption : TURA, 14-02-2008: PA SANGMA FILING HIS NOMINATION FOR MEGHALAYA ASSEMBLY ELECTION - Former Lok Sabha Speaker and NCPâs Chief Ministerial candidate Purno A Sangma along with his two sons James and Conrad (in right) on his way to file their nomination papers in Tura, West Garo Hills of Meghalaya on February 14, 2008. Sangma and his two sons are contesting Meghalaya Assembly election from Garo Hills. Meghalaya Assembly Election is scheduled to be held on March 3rd and campaigning for the election is gearing up through out the Meghalaya state. Photo: Ritu Raj Konwar