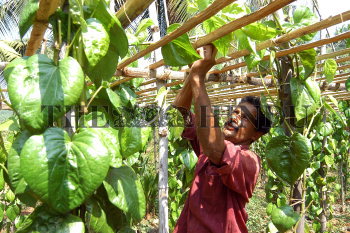 Caption : A farmer tending his betel vines in a farm near Nileswar in Kerala's Kasaragod district. This crop which was cultivated extensively in the Malabar region has dropped sharply of late for want of market and remunerative prices. Decline in chewing pan among the new generation in Kerala where it was traditionally common has pushed down the demand. Currently it is sold at Rs200 per hundred leaves and the main market at present is north India. Due to weak demand it is grown at present as an intercrop. Photo: K_K_Mustafah 14/02/08